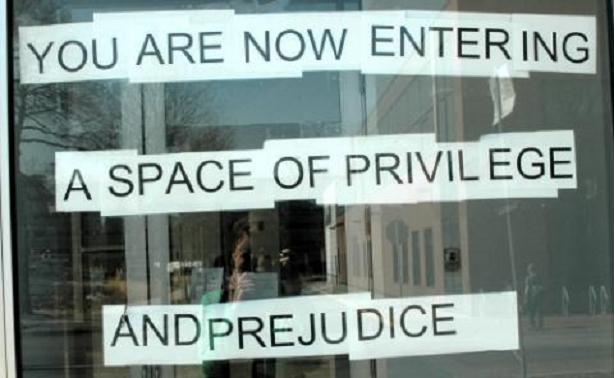 My privileges are that I’m white, educated, able-bodied, born with a gender I’m comfortable with and in a wealthy country with universal health and education. I am not living with an active addiction. I can read and write fluently in my birth language and am capable of accessing technology and resources that allow me to speak my opinions. My body shape and size does not exclude me from active social and public engagement, I have the freedom to choose my own religion (or lack thereof), sexuality, employment, place of residence, clothing. I have enough money to buy food, pay for shelter, entertain myself. I live in a city where I can find other people who understand and embrace my lifestyle choices. I cannot be incarcerated for speaking, writing, protesting and have the right to a democratic say in my nation’s governance. I am very privileged, I write this article from this privileged position.

People get really upset when they hear the P-word, particularly if it relates to them.

I was talking to a friend a while ago who told me about how they did a lot of skiing while they were growing up and I commented, in an offhand fashion: ‘Well, aren’t you privileged?’ This was almost a friendship ender. To fix this, we had a serious discussion about my understanding of privilege and that it wasn’t meant as an insult, just part of my general ‘always check your own privilege’ approach to life. We can now talk about privilege without all the extra weight of expectations.

Maybe we’d all be better off if we could strip these conversations of those expectations?

Or re-examine those expectations with an eye to accountability rather than blame?

Maybe if we all take the space to own our own privileges, then we’ll be able to hear others discuss how these privileges impact on them without resorting to rage, denial and justification?

If you’ve never seen the knee-jerk HOW DARE YOU CALL ME THAT reaction to discussions of privilege, then I encourage you to post an article about the topic on your social media (any of the ones I quote below should do it), and see the reactions roll in. If you’ve got a reasonably diverse group of friends, then you’re more than likely going to get at least a few comments along the lines of: ‘I’m a white man and I’m not racist/sexist/homophobic/classist, so I don’t agree with any of this’; ‘yeah, so I’m *this privilege* but I’m also *this disadvantage* so my privilege doesn’t count’; ‘it’s not all men/white people/straight people/rich’; or, (my personal favourites) ‘but you’re white/male/straight/employed, so why are you talking about this?’

I’ve been reading a lot about privilege lately. It might be that we’re talking about it more, or it might be that I’m just clicking these links more. In the last week or so, I’ve read three things that unpacked how privilege works (and how it can be owned, understood, and challenged) particularly well.

This speech by Nakkiah Lui, “It’s Not Racism That Australia Needs To Get Rid Of; It’s The Privilege Of Whiteness”, called out the white male privilege that is inherent in Australian culture. Lui said:

It’s not racism we need to get rid of; it’s the privilege of Whiteness. Race is only constructed to maintain power and privilege. Without anyone in power, racism doesn’t exist. Racism isn’t the issue; it’s white people and their white privilege. If racism were different races in a boxing ring, fighting it out, whiteness is the boxing ring, referee and audience.

Lui argues that what worries racists most is ‘the disintegration of Whiteness’ and how if the power dynamics that maintain racism are fractured, then the precious Whiteys (my words, not hers) will lose our legitimacy. She wanted to try and offer us, the ‘white boxing ring, referee and audience’ some way of challenging this, but she couldn’t. All she could say was ‘How do you tell people that they have to give up being at the centre?’

And this is fair enough. White privilege is a white thing, we built it, maintain it, enforce it, goddamn it, we should own it and do what we can to dismantle it. It’s not up to the people we actively subjugate on discussions of whiteness to tell us how to stop said subjugation. Lui is right, white people need to find these answers.

But that’s not fair, I hear you cry, if it doesn’t affect me then why should I do anything to fix it? Maybe because you can is all the reason you need.

D Watkins made ‘because you can’ the central argument in his article calling out men who harass women in the street, “I’ve seen my friends harass women on the street. I can’t be silent anymore”. Watkins describes his experiences on the streets of Baltimore, hanging with dudes who think it’s fine to sexually harass a young mother walking with her children. He hits to the heart of the issue, men setting examples for boys, when he says: ‘Remaining silent and following suit is how our misogynistic culture is sustained for generations’.

Watkins asked feminist activist Juliana Pache how to fix this problem and she told him:

Privileged groups should stop expecting oppressed groups to teach them. We’re busy being oppressed. The whole concept that privileged people won’t learn unless we teach them is just pure laziness. If you care about the people around you, you’ll do the work to educate yourself.

So here, Watkins is filling that space that Lui couldn’t, enunciating the solution: ‘Us men are responsible for not only stopping guys from harassing women, but also telling others to do the same. For this is the only way to shift the culture.’ He’s picking apart the threads of privilege, owning his own position and pointing the way to shifting the dynamics of male privilege.

As unchecked male privilege, privilege that exists with no dissenting voice, leads to men thinking they also have the right to touch, rape and kill women, men like Watkins are the front line in the fight against the pervasive violence women live with every day. If we had more men like Watson, then maybe we couldn’t need groups like Destroy the Joint counting the women in Australia murdered by partners and loved ones.

Watkin’s awareness of his own position of privilege is key to doing something about it. As Peggy McIntosh wrote in her seminal anti-racist essay “White Privilege: Unpacking the Invisible Knapsack”, ‘I have come to see white privilege as an invisible package of unearned assets that I can count on cashing in each day, but about which I was “meant” to remain oblivious’. This intended obliviousness is what Watkins was breaching when he explained remaining silent.

McIntosh writes a checklist in her essay of all the privileges that her whiteness earn her, a list that can be easily transferred to any privilege. This checklist, for McIntosh, was a way of remembering the many ways in which the colour of her skin automatically entitled her to different (and preferential) treatment.

Taking McIntosh’s approach and expanding it to cover all privileges is what resulted in the list I began this post with, a list that I like to remind myself of often. But as so many of the privileges we carry are invisible, and designed to be invisible, it can be useful to hear from those who’ve lived both with and without privileges, and this is where the third interesting thing I read comes in.

James St James is an out trans man who presented a handy list on Everyday Feminism of 25 examples of male privilege seen from both sides. St James ‘passes’ as a white male, and his experience of the world has shifted dramatically. From simple things (like being interrupted less, being seen as more funny and taken more seriously) to scary things (having no inferred responsibility for preventing rape, being seen as a threat in the street), he unpacks what it means to move from the disadvantaged gender to the privileged:

I’m read as a man now, after all. And the irony there is that other men are more apt to listen to me about these issues… if you’re a guy anywhere on the spectrum, do your part by calling out issues as you see them. Participate in charities, organizations, and walks. Vote on important propositions. Tell male youths what is and isn’t acceptable behavior.

While St James acknowledges transphobia, and the baggage that goes along with this, he doesn’t argue that this disadvantage outweighs his new male privilege, which leads into the last important thing I have to say.

This is the answer to that person on your newsfeed who says ‘but I’m *disadvantaged* so my *privilege* doesn’t count’. Privileges and disadvantages don’t wipe each other out. The privileges that come because I’m white don’t negate the disadvantages of being a woman and gay. I don’t get a free ride to be racist, just because I suffer sexism and homophobia.

What I do get is a chance (and obligation) to call out (my own and other’s) white privilege, able-bodied privilege, class privilege, etc, etc. And, if I have any energy left over, I can try and fight back against the sexism and homophobia… but it would be really great if more male and straight people could help carry some of that weight.

So, check your privilege. Write your own list and ask other people about their lists. Think about whose voice is most qualified to speak on a subject. Listen to the non-white, gay, female, less-abled, trans, etc, voices and actually hear what they’re saying. Make space in your head and world to understand that you can own your privileges (it won’t kill you) and in doing so you can create space to challenge the impact they have on others in your world.