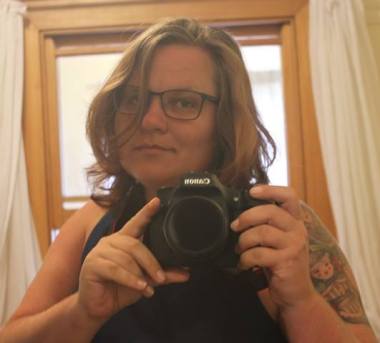 A writer, thinker and yeller, Angela Williams is mildly notorious for seeing problems and pointing them out. She’s tussled with Fred Nile in the Sydney Morning Herald, taken academia to task in the Guardian’s Anonymous Academic, gone to Crikey about the treatment of mentally ill women in prison, and most recently blown the whistle on dangerous risks in her (former) charity workplace. Angela does one thing really well – find problems and yelling about them.

If you would like to support Angela’s creative and riotous schemes, please consider becoming a Patron for as little as $1 a month.

Patron rewards include a discount on future editions of Snakes and Ladders, access to Patron-only blogs and stories, and (in the near future) discounts on digital workshops and book clubs.

Angela often describes herself as having lived too many lives for one body. Born into a family rife with addiction,  personality disorders, cyclic child abuse and (only sometimes diagnosed) mental illnesses, she escaped into words as a child, fantasy as an adolescent and heroin as a young adult. Always a thinker, by her mid-twenties Angela had worked out that for her the path out of poverty, disorder and a downhill slide into addiction lay in education. The low-achieving high school dropout packed up her metaphorical baggage and headed off to university.

As a writer, Angela ranges across fiction, memoir, creative non-fiction and theoretical rants. She holds an audience well, loves a good argument and talks with her whole body. As a sometimes motivational speaker, she eloquently unpacks the lessons learned from a hard life and emphasises that there’s always a way back, out and up.

Angela lives in Sydney, NSW, and is available for speaking, writing and thinking engagements of all sorts.

If you’d like to get in to get in touch, please give me a hoy using this handy interwebs communication box or hit me up on Facebook or Twitter (look right, yeah in that sidebar).

What do you think? Cancel reply