WIRD has been invited to strut their stuff for the crowd at the Thirroul Seaside Festival. We started talking about it a while ago but really only got one kinda rehearsl in before hand so I’m a tad nervous. The plan is that the girls will skate around behind me on the ‘stage’ (it deserves the ‘*’) and I will give a spiel about derby and WIRD, calling in individual skaters to explain things.

Ha. Mostly went according to plan. Some pre-show stress sent me into a tent where I gulped coffee, sweated and generally worked myself up. I get very nervous. No reason. One of our girls got tossed on her butt, I got roused on for tapping the mike on my helmet, and after the gig we rubbed up against the crowd, handed out business cards, and forced a fireman into posing for pictures with us. 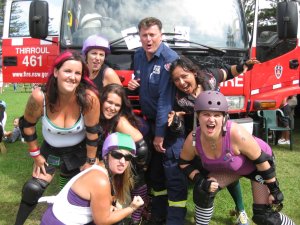