This was my office today 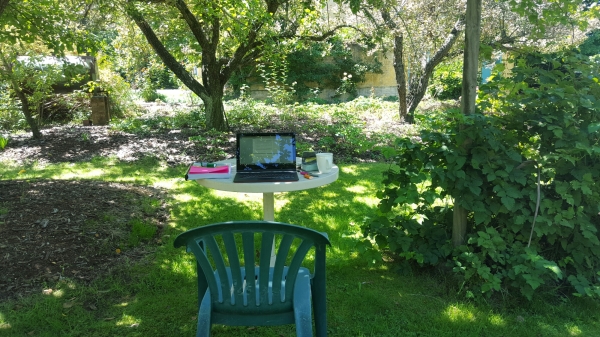 Number of chapters: Part 1 now includes 9 almost full draft chapters, still at about 60% old/40% new but now I’ve written a whole lot more new stuff; written a new prologue but I’m not really comfortable with it (need to pore over a dictionary or find a magic lamp with Shady Cosgrove in it); I think I might have accidentally given myself a new working title

Writing the following without disappearing into a bubble of shame: But it’s a history that I’m very familiar with. One of the benefits of a childhood like mine is that you don’t walk out of it feeling like everything is going to be okay. I went mad after I left home. Truly mad. When I wasn’t high on drugs I was drinking myself into oblivion. I picked fights with strangers and friends and lovers. I discarded people as soon as I got the ‘now you’re supposed to trust me’ vibe. I couldn’t trust anyone, least of all myself. I saw doctors, counsellors, emergency rooms. I began a cycle of admission and readmission to psych wards (always after suicide attempts), where my psychological symptoms were written off as drug abuse problems. I was a dual diagnosis patient who was refused psychological help until I could get my addiction under control. Then I met Shrinkola and everything changed.

Got through most of yesterday’s ‘tomorrow’ list, except the birds/bushwalk bit and the workshop has been put off till tomorrow.

How I am feeling:

The last two nights have been filled with really horrible dreams. Dreams I can’t explain. They’re probably mundane to people who don’t live with this filth in their head but to me they are excruciating. That’s all I can say on that. After I wrote that bit up there, I collapsed into bed and napped for 3 hours. Woke up crying.

Took my computer outside to write this for you and saw this stream of small feathers across the grass. Some people might call it angels or fairies, I call it the universe giving me just what I need. All of the traumas I’m putting on paper are bits of myself that I can let go of without losing anything essential to me.

Not wake up crying (if I can at help it at all).

Get Part 2’s post-its up on the wall. Pretty confident most of Part 2 is already written.